Winter is a perfect time for reading up on all sorts of things. Which in turn is the perfect excuse for curling up on the sofa and not moving an inch for the next three hours. It’s the perfect pastime: 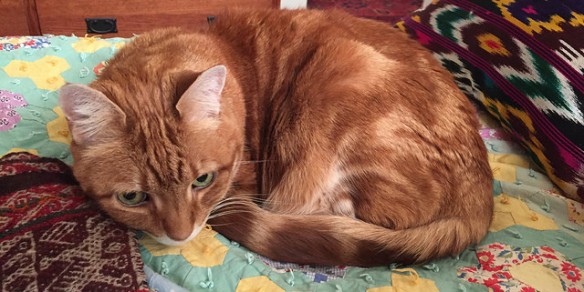 A Cat’s Day Off, by A. Davey (Click to view this and more of his pictures on Flickr)

Just a couple of days ago, I ran into a curious thing about numbers. In this case, numbers that reflect the growth of the global human population.

Knowledge… and the thing about population numbers

Far back in time, numbers are partly (or even mostly) based on educated guesses. It’s estimated that about 2000 years ago, the total population on earth of homo sapiens (or at least the species that is assumed, by individuals of that same species, to be able to think), is estimated to have been somewhere around 300 million. Rome hit the 1 million mark around that time.

As intriguing as the table (which I found in Gurteen’s Knowledge Newsletter) was, I thought it was lacking something. So I added two more columns, figuring:

The number of births per year. And when you see those numbers, you realize two sets of numbers are developing in opposite directions.

So… what are the odds of 7 billion human beings having no impact on their environment? (Nope, I’m not adding examples.) On the other hand: if 1 million people decide to rip their lawns out and putting in plants that provide shade and cool spots in the garden instead of trying to keep all those lawns green (and the air conditioning roaring) in another sweltering summer,* that will have an impact, too.

* Not summer around here. We tend to get wet no matter the season. I looked it up last autumn and my hunch was right: we’re in the perfect region to get seriously soaked (as confirmed by 10 year average rainfall stats). I’m not going to risk growing grapes 🙂