Early this spring – in March – I discovered two pea plants in the garden. After racking my brain I remembered I’d chucked a couple of peas into the garden after leaving them too long so they’d turned into dry peas of their own accord.

Lesson one: peas are easy to dry.

Do absolutely nothing for best results. If, on the other hand, you mean to eat the peas, don’t wait when the pods start to turn yellow or the plants start to get dry. It’s the end of their season. Harvest and enjoy, or wait and collect seeds (dried peas) for next year.

A while later, I found only one pea plant among all the other plants (including narcissae, unplanned grass, and loads of ‘weeds’). It had happily used the other plants as support – peas will knot thin strands around anything they find and grow on. The other plant had probably been eaten by slugs hiding in the dense undergrowth. The remaining plant gave us several pods of deliciously sweet and tender peas.

Lesson two: peas from your own garden taste at least ten times better than the stuff that comes in tins.

Last year I left some peas half-covered in a muddy pot for days before getting round to planting them. I found many of the peas had developed roots by then. So this year I decided to put a handful of peas from a bag that had been open for two years in a bowl. First, I let them soak for a night. The next day I did this: 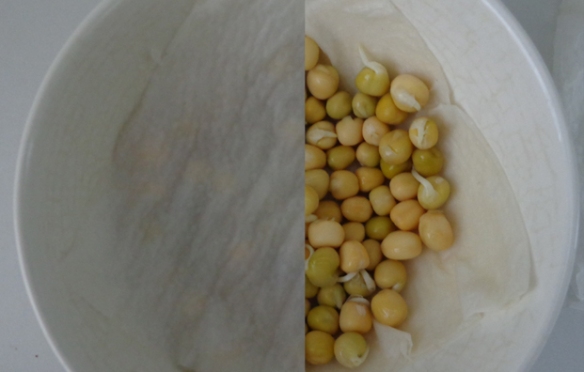 With one folded-up piece of paper kitchen towel underneath and one on top, which I kept moist, this is the kind of method kids can and do use at primary school – and it works a treat! Which explains why I have now got about 40 pea plants in three containers.

The top layer not only serves to keep the peas moist, but it also acts as a filter – mimicking the peas’ natural position under a thin layer of leaves or soil.

Lesson three: don’t leave ‘hatched’ peas in the bowl for too long

Like I mentioned, I only threw a couple of peas out into the garden. Then nothing. So long as you provide some kind of plant that will act as a support, those peas will grow quite happily. Growing peas in containers is more work: if you don’t put in a support for them, they’ll strangle each other. I’m serious. They’ll try to use each other for support, each pulling the other down, and you’ll end up with a tangled mess lying on the ground, that is a perfect cover for snails and slugs, too.

Peas grown in a transparent container quickly develop roots over 4 inches/10 cms long, so make sure you have plenty of room for them to dig down.

Well, they love anything tender… unfortunately, peas don’t grow thick, slug-proof stems. Used coffee grounds seem to keep them away. Personally, I wouldn’t like the smell either – not from two millimetres away! I leave the coffee grounds to dry until they’re nice and powdery again. Fortunately the garden is crammed full of plants, so there are plenty of other opportunities for ambitious slugs and snails.

Another suggestion I came across is to use strips of copper, bent into closed rings which you then insert into the ground around the plant you’re trying to protect, with maybe an inch above the ground. Haven’t tried it yet, if you have, please let me know the result!

That’s it for my pea party…

Meanwhile, my strawberry plants are going nuts – they’ve loads of strawberries, unlike last year, when they were confined to small containers. Guess putting them into the garden in August was the right thing for them 🙂

Update: ate part of the first strawberry. It was a big sweet one , which had unfortunately been close to the ground in the rain the past few days. So part of it had softened and was already being eaten by a couple of moisture-loving crawling creatures. Thankfully they did a neat job, so I could cut their part away and salvage a few edible chunks. Anyway, it means we have competitors with a sweet tooth. To think I had been worried about birds!